The Gift That Keeps on Giving!

We’re all looking for the gift that keeps on giving. No-one wants to be the giver, or the receiver, of the gift that isn’t remembered the day after! You want to give an amazing gift that will be enjoyed for a long time. You want them to remember the occasion, and probably won’t be disappointed that they would remember that you gave it. It is not as hard as you might think. You might not be able to make it a special day, so just remember what was the most special day of their past – and have them enjoy those same feelings every day.

“Any items you have that are associated with Dad’s greatest memories can be framed so that he enjoys them each and every day!”

If they won a medal – frame it for them to enjoy. If they built a business from the ground up – frame something that reminds them of the accomplishments. If they attended a sporting event that really was memorable to them, frame the tickets and photos of them at the game. Concert tickets and albums of favorite bands, players jerseys, even some jerseys or clothes they wore years ago, that are associated with great memories can be framed up and certainly can be the greatest gifts you can get a Father.

Here are some questions you can answer to come up with the greatest gift for the Father in your life:
What is his favorite sports team?
Did he play himself? Enjoy it?
What are some of his greatest accomplishments?
Who fills a very important place in his life? Maybe you?
Are there some ‘bad’ memories that he can now look back at & laugh about?
What is his greatest goal/s?
What would he like to buy if he could afford it? (Pictures and models may be affordable)
What would he do if he had the time?
What won’t he ever throw away!?
Any of these answers should be enough to get your ideas churning – bring them to us and we will help you make more than a special Father’s Day!

The Framing Nook can help you make a lasting impression this Father’s Day! 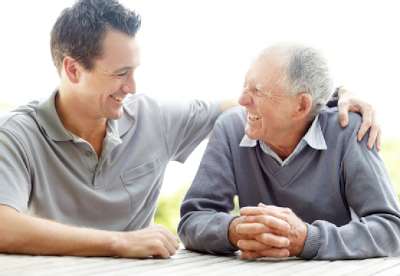 I came across this article and thought, “Wow, could this be any more accurate!” Having a father who passed away, I enjoy the things that bring back memories of him. And I’m sure no matter what stage of life you’re in, you can relate to this too. 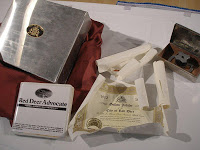 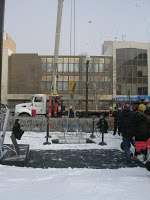 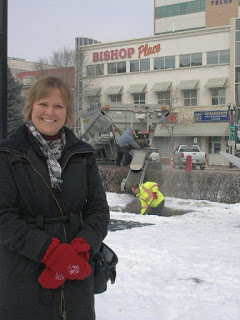 A Trip Back In Time

Items from the old time capsule.
Outwardly, I blended in with the crowd and appeared calm, but inside I was excited. I was going to a ceremony. A time capsule ceremony. I had never been witness to such an event before and I could hardly wait for the start time to arrive. I had arrived early, not knowing how long it might take me to find parking in downtown Red Deer. There were about 5 other people on site when I arrived. The snow was beginning to fall again.

I had time to notice the snowflakes and be amazed at each beautiful design, which added even more excitement to the little girl inside me. I found a good spot to stand and soon there were hundreds of people joining me. It was a privilege to stand beside an elderly lady who had been to the City’s time capsule ceremony 50 years previous back in 1963. The ceremony opened with us turning ourselves to face the Canadian flag flying on the City Hall building. I had to choke back on some anthem words because of the excitement still welling up inside of me. After a few short speeches by various VIPs, I think the chilly weather that day helped with that aspect, it was time for the crane to lower the big metal time capsule into it’s resting place.

Janice Rypstra in front of the burial.
We were then directed to walk over to the library and into the Snell auditorium for the opening of the 1963 capsule. It was standing room only. The Mayor was finally able to make his way through the crowd and up to the table. It was so thrilling to be able to watch the Mayor open the small box and show us the contents, piece by piece; it was like opening birthday presents! The most exciting artifacts to me were the document proclaiming the official first 50 years of the city status from 1913 – 1963, 8track tapes that held radio news, a floppy hard disc drive holding Red Deer Advocate news and a mini microfilm reel which held news from Red Deer’s TV station from way back then. Hopefully the city still has such antique machines to use in order to retrieve the news from them! The ceremony was complete with cupcakes for all. To find out more about Red Deer’s 100th City Status Birthday celebrations happening all year long, visit www.reddeer2013.ca 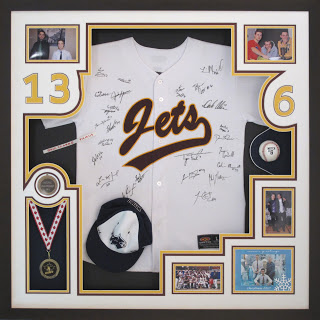 Sometimes my job is bittersweet. We framed a huge beautiful portrait of Pete for Sharna to give as a gift to her partner. Pete was her partner’s handsome Weimaraner and, unfortunately, he needed to be euthanized due to cancer.

Losing a beloved pet is heartbreaking, but losing best friends to a senseless murder is beyond tragic. That is what happened to Lori’s son on December 15, 2011 when his best friends, Mitch MacLean, 20, and Tanner Craswell, 22, were shot to death just north of Claresholm by the ex-boyfriend of a third murdered passenger. All the boys were up and coming baseball players, so Lori had us frame a team signed jersey along with other baseball memorabilia of the friends for her son.

Yes, sometimes my job is bittersweet and whether it is the loss of best friends or a four-legged friend, I am grateful in my job to help honour loved ones who are gone.

Hopefully, our work can, in some small way, help the healing begin. 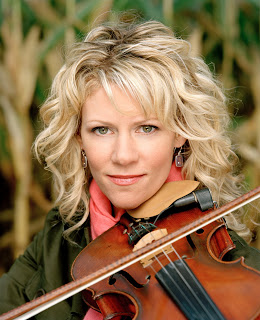 Every once in a while it is good to set aside work and find something else to do.  And that’s just what the Boss and I did last Friday evening, April 12.  With tickets in hand that were bought before Christmastime, we headed to Red Deer Memorial Center with a couple friends.  When we arrived, the parking lot was full!  We took that to mean a good thing….except that meant we missed the first couple of minutes of the concert.  Upon entering and out of curiosity, I asked at the ticket booth attendant if the show was a sellout.  He said “Yep, except for 1 ticket!”  Whew! Good thing I had pre-purchased tickets far in advance!  Our designated seats were in the 2nd and 3rd rows from the front and about 15 feet from a set of speakers – we were sure to hear every sound!  Sure enough, we were not disappointed.  The drummer was an interesting fella to watch as he also played a variety of percussion instruments.  I always get a kick out of watching bass guitar players – they have the most interesting head moves. And then there was the guy who played bagpipes, harmonica and a whole whack of different flutes and pipes – he could even play two at a time!  Oh, and there was the most talented piano player, a younger man, and boy could he make that piano sing!  I loved watching his fingers fly across the keys and all with no written music to look at!  The center of attention though, was Natalie MacMaster.  Besides being a mother of 5 children, she sure is a fine fiddler and tap dancer.  Smart too – she does her exercises while she works!  It was a wonderful two hours of foot tappin’, hand clappin’ and knee slappin’!