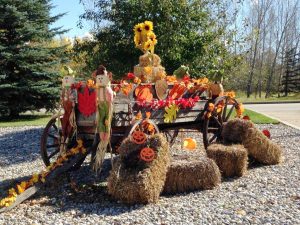 As I write this article, my office window is open and I can hear geese honking as they make their way to their southern communities, but I can also hear robins still singing their happy chirps here! So glad the September Snowstorm didn’t scare them away just yet!
As I reflect over the last 6 weeks or so, some of the Red Deer Community events we attended were quite notable for Red Deer! We were able to take in the Red Deer is Ready Rally announcement on Ross Street and were excited to read on the jumbo screen that Red Deer had won the bid for the 2019 Canada Winter Games! A few hours later that same day we could watch top world cyclists cross the 2nd stage finish line of the Tour of Alberta. That was thrilling to be able to stand along the sidelines and watch them cycle by at such speeds, my hair being blown by the wind gusts they stirred up! You can watch the video clip I took of that on our Facebook page. It amazed me that the official reporting photographers, who had their little red taped-off section inside the track about 50 feet past me, didn’t get knocked over!
Another air stirring event for Red Deer, was the Air Canada Anniversary Celebration of 1 year air flight services to and from the Red Deer Airport! It is very handy to not have to drive all the way to Calgary or Edmonton on QE2 during the winter months for us local people, as well as in aiding the Canadian Winter Game participants to arrive so close at their destination in 2019.
One community event in which we were able to take a couple of our grandchildren to was the Fort Normandeau Days. We had the privilege of seeing our Native friends, Tanya, skinning a deer hide and Lyle, commanding his warriors during a war re-enactment. We could cook our own bannock over an open fire pit. Their Berry Soup was a huge hit with our grandchildren!
And so as the seasons change from Summer to Autumn, we’ve enjoyed looking back, but we also look forward in anticipation to some of the upcoming Red Deer Community Events in which we either plan to be a part of or volunteer at or just to able to visually enjoy: 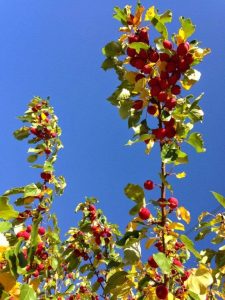 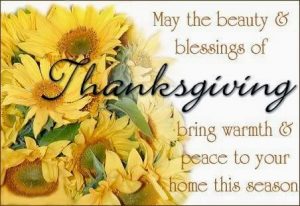 Summer time has passed for this year and that means Thanksgiving time is here once again! Where has a whole year gone? I know I’m another year older, so does that automatically indicate I’m getting wiser too? Some might say “Yes”, others might say “No”, and others might say “What in the world has gotten into her”? Some of the wilder things I’ve done so far this year is flown over a volcano on my first ever helicopter ride with its doors off, stood under and behind the mighty Niagara Falls, and climbed hoodoos in rattlesnake country dressed in a jacket, skirt and flip-flops! Not bad for a grandma, eh?! Some of the more fun things were playing with my grandchildren, cracking open an oyster to find 2 identical pearls in it, and going for a ride on the Canadian Hornblower catamaran.
Some of the more serious happenings were quite recent – that of an acquaintance’s 3-year-old granddaughter passing away due to E-coli, one of our employees suffering from a mild heart attack and one of my brothers being rushed to the hospital due to an atrial fibrillation condition of his heart.
The weather here in Alberta has been most interesting this year with spring arriving so late, the supercell passing over and dropping 1 inch plus-sized hail, gorgeously clear blue skies on hot summer days, as well as that September snowstorm!
And so Thanksgiving grants me the opportunity to reflect on all these happenings, plus more. Despite everything that has or has not happened, are you still able to be grateful and thankful?
Let’s count our blessings and name them one by one.

Is this your usual Christmas Dilemma:

Indecision!
rush..Rush..RUSH!
Overpriced!
AND,
you end up giving something that won’t be around in a few years at most! 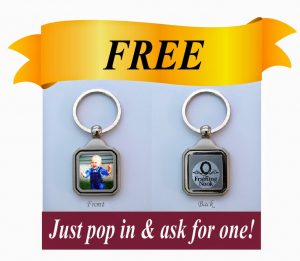 We have YOUR solution:
Give something they will keep FOREVER!
Great Personal Keepsakes with Lasting Value.
We help you through the process. Special deals just for you.

Go here to find out how!