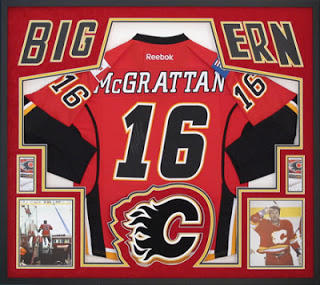 The NHL playoffs are on and televisions all over Red Deer are tuned to TSN. We’ve had the privilege of framing hundreds of signed jerseys for devoted fans. In Red Deer you’re either an Oiler or Flames fan—never both! The jerseys we’ve framed have included the Gretzkys, Smyths, Crosbys, Ovechkins, Lemieuxs, and , of course, RNHs. But the one I want to tell you about belongs to none of the above.

After the April 19th game against Anaheim in Calgary, Brett brought in a Flames jersey that we had never framed before. It belonged to Brian McGrattan, the 6’4″ 235lb. right winger for the Flames. In the regular 2012-2013 season, McGrattan scored only 3 goals, but he did manage to rack up 49 minutes in penalties. His job on the team is obvious. He makes the high-priced help look good. When Brett managed to get his signature on the jersey by hanging it over the boards that night, McGrattan was as surprised as anyone that someone wanted his autograph. Brett’s next step was to bring it to us to frame and he wanted it to be awesome! Incorporating 2 pictures Brett took of McGrattan at the game as well as carving his nickname and the Flames logo in the mats made it impressive indeed. Brett’s final step is going to be to send McGrattan a picture of his framed jersey, thanking him for his hard work on the team.

Hearing Brett’s enthusiasm for this unsung hero was heartwarming, reminding me that
“all players aren’t superstars but every one of them makes an important contribution to the team.”
(Kind of a microcosm of life, don’t you think?)

Oh yeah, I forgot to mention the score that night was 1-0 for Calgary………..Brian McGrattan scored the winning goal!!!